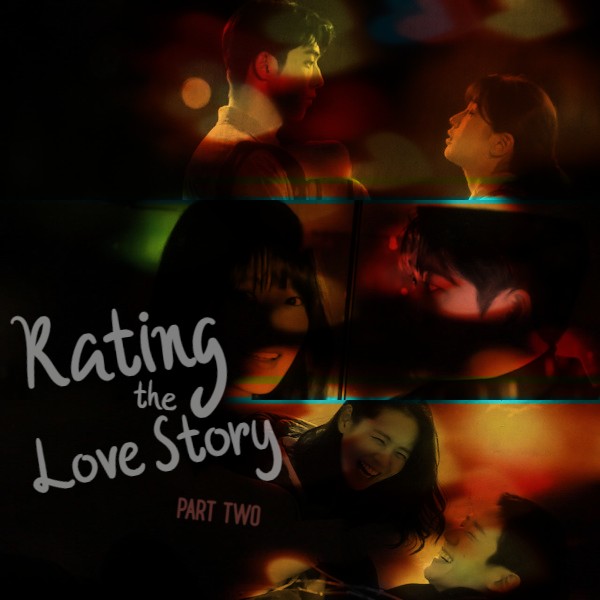 Rating the Love Story is a K-drama Fizz exclusive feature, highlighting the best and worst of K-drama couples.  Click here to read Part I, which focused on the love stories of Hello, Me!, Itaewon Class, and One Spring Night.
This next edition, Part II, will feature love stories from Run On, Something in the Rain, and Start-Up.
Rarely does a couple in a supporting role outshine the protagonists, primarily due to lack of airtime, and although Seon-gyeom and Mi-joo were worthy lovers in their own right, Dan-ah and Young-hwa proved how undeniable true chemistry can be.  The chemistry - or, in this case, sexual tension - was unmistakable the moment they first met.  In fact, I dare say, the two displayed more chemistry in their initial scene than most drama couples do in an entire series.  I don't mean, however, to render their story shallow or sexually-driven, for theirs was a deep connection that, at times, was obstructed by real life issues: the difference in age, for instance, or the class divide.  In the end, a death in the family seemed to set Dan-ah free, and with her newfound freedom and the goal of attaining her family company's Vice Presidency achieved, her reconciliation with Young-hwa became a reality.  With this, Dan-ah and Young-hwa cemented their status as, in my mind, the best second lead couple since Descendants of the Sun's Yoo Myung-ju and Seo Dae-young.
FINAL RATING:

Although traditional love stories make our hearts weak, it is the unorthodox that often make our hearts flutter, as was the case with Jin-ah and Joon-hee - an older but vibrant woman who falls deeply in love with her best friend's younger brother.  In an industry where love stories are often colorful and enchanting and, even, magical, Jin-ah and Joon-hee's unconventional tale is no fairy.  In fact, it's quite possibly the most realistic portrayal of love in dramas ever, and that in itself, sets this couple apart.  As expected, the stumbling blocks are many - the horrid mother, the disappointed friend, etc. - and although our young couple handles it all with such courage, it is an unexpected threat that presents the their biggest challenge: their love for each other.  Although they could withstand the worst for themselves, they simply couldn't watch the other in pain.  It hurt too much, and therefore a sacrifice was required.  For him, the decision was simple: take her away from it all.  But for her, it wasn't as easy, so Jin-ah made the biggest sacrifice of all: set him free.  As realistic as their love was, I thought, for a moment, this was their end.  But love like this is undeniable.  It is magnetic.  And in the end, Jin-ah and Joon-hee discovered that the pain they felt while apart was much greater than any obstacle in their way.  This, folks, is the love story of love stories.  It's enchanting in its realism, and every step of the way, you will find yourself rooting for Jin-ah and Joon-hee as you would for an elderly man who, suddenly, desires to learn ballet.  And it feels oh so good.
FINAL RATING:

From the very beginning, Dal-mi and Do-san's love story was destined to fail because it was, in essence, based on untruths.  Initially, Do-san's association came in name only, due to a scheme invented by Dal-mi's grandmother while Dal-mi was a mere child.  In my mind, this does not a love story make.  I suppose it's conceivable that the two would later meet as adults, once more due to the above-noted scheme, and fall in love, but I'm not so convinced.  It's a faulty premise, however you look at it.  But Start-Up thought otherwise and went ahead with their improbable tale.  To make matters worse, the show completely dismissed a love story that was, in my opinion, far more convincing, and that is the story of Dal-mi realizing her true love is not Do-san, whose name was randomly picked and put in a letter but, rather, the author of that letter, Han Ji-pyung.  It made too much sense, when the opportunity arose, not to script a happy ending for Dal-mi and Ji-pyung.  The script itself, in fact, gave the writers an out: Do-san leaving for Sillicon Valley, paving the way for Ji-pyung to win the girl, but alas, it wasn't meant to be.
FINAL RATING: